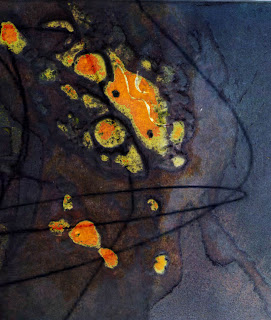 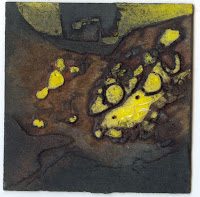 One of my favourite pieces, insofar as the process was exactly what I originally hoped it would be, was Day 40.
I began with the prompt - ‘caught red-handed’ - and sought lines of poetry which expressed the ‘can’t deny you did it’ aspect of it, finding:
‘She goes like the burdened bee’ …
‘The slut, the shame’
‘Burdened bee’ recalled the yellow flashes of an image (a collagraph plate) I’d briefly tried and rejected the day before.
Rotated anticlockwise through 90º, a pregnant belly (complete with navel) became apparent.

To stress the shape, and add a linear element, I chose one of a series of oft-used photographs of reflected wire. Rotating clockwise, stretching and superimposing this second image over the first gave the desired effect and the image was, for me, one of the more satisfying because of closely fitting what had been intended - poem plus image plus prompt, which was my intent for the concept - a visual response, using Orkney-derived photographs and artwork to the poetry of George Mackay Brown (summarised in the first post on this blog).

Thus far the 100 days has been very stimulating, although I haven’t always done as much interaction / collaboration as I hoped - the result of sticking to my original premise.    Nevertheless I think some self-elected theme is necessary, and I needed to avoid writing since I already have plenty of that on the go elsewhere.


Additionally - as Steve Wing has just pointed out (and I wish I'd thought to say) - the feedback is encouraging and stimulating.  In unexpected ways, which is a Good Thing.
Posted by Sandra Davies at 06:34

Sandra Davies
Writer, printmaker, family historian. Born on the Essex coast, I now live in Teesside, both places having the flat estuarine and sea-edged horizons essential for my sense of well-being.